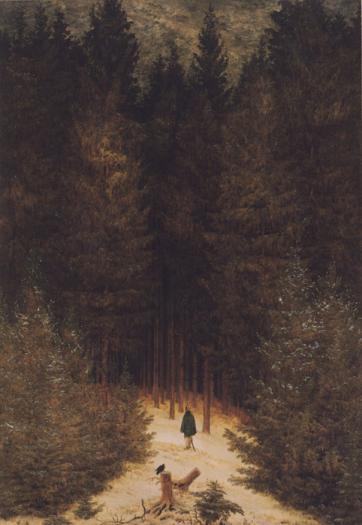 Roerich added that it could use more development in order to make it more interesting.

To which ThomasRuz said that they could expand on Occult and Druidic influences that are present in Malekna.

Saint Jiub: “Dark/dense is good, I just don't think we need to overstate it with like fog effects and spooky scary skeletons. The fact that the player is fighting an immortal pissed off wolf god is going to be creepy enough. Karstaag Castle is a good model for his lair I think - hints of nobility buried under dirt and blood and raw primal savagery. Maybe some markers for the edge of his territory - wolf skulls on stakes and like wooden wind chimes or something. Have activator sounds for birds chirping, boars snuffling, etc. in the areas around the forest, and then have those sounds completely drop off once you cross that threshold.”

It was decided that Malekna Forest doesn’t need undead, as The Crypt of Hearts already fills that criteria.

Saint Jiub wondered if these could work as border markers for dangerous territory in the forest:

Saint Jiub: Border markers for KDWD's territory? You hear the sticks clattering together before you see it, so you have some warning that you're getting close. Really, these would probably be useful for denoting any particularly dangerous territory (witch covens, druid enclaves, etc).

Miraclestone: “The two most important things about the zone are the crypt and KDWD. Since it's so small in cells, the focus will undoubtedly have to be on them with minor elements on other themes. There is also most likely something about the area that made it suitable/required for both the crypt and KDWD, they may be connected. We'll have to figure out why KDWD doesn't mess with the knights of the heart too.”

Miraclestone: “The Knights of the Heart haven’t really been in the forest since the The War of the Bend'r-mahk, because of the spread of shadow magic causing them to lose control over the crypt. But we'd still need to answer how/why the knights/covens were able to co-exist for so long with KDWD.
Just throwing out an idea but maybe there is something about the forest that sedates those within it. The races of old buried their dead there because they had issues with angry dead in most of the other parts of High Rock but not in Malekna Forest. That’s why the crypt was created, because it was a perfect spot to store the dead so they wouldn’t return. And maybe this is also why KDWD has stayed there so long, because on a subconscious level it is calming KDWD and keeping it stationary. KDWD is still mad/crazied enough to kill anything that comes near it but not driven enough to leave its part of the forest and cause destruction in HR.”
Last edited by Iskuss1418 on Sun Oct 22, 2017 4:33 am, edited 4 times in total.
Top

Roerich pointed out that the name for Malekna forest did not fit HR in his opinion, lacking the 'gaelic' ring as he put it. He suggested that Malekna might be changed to Malecnar instead. R-Zero admitted that since the region was taken from TES:II as an unplaced region, it could have easily been in Hammerfell. It was discussed whether it should be moved to the Hammerfell designs Infragris has been working on but the conclusion seems to be that dropping the k for a c would be fine for HR. Thomas wanted to make sure that Malecna Forest would be a misty place.
Top

Malekna spiders as large as a large dog(Great Dane).
Top

ThomasRuz: Forest/Swamp mix, Continuous rainfall sometimes with sleet, misty, pretty much windstill, slight breezes that wave the branches around so to speak.

Lympan March Vs. Malekna Forest Debate: In Summary: We're still discussing if the Lympan March and KDWD should have been teleported together to High Rock, or if he just moved to Malekna forest. We agreed that in either case, the details should be left vague to protect KDWD's mystique. The advantages to having him be teleported to HR along with Lympan March is that it would explain why nobody knows he's there, and why he didn't leave a trail of destruction. It could also help make the area more interesting by adding elements of Valenwood's alien feel to HR. The disadvantage is that this would require more models and technical work to do. The advantages of having him move to Malekna Forest are that some of us were uncomfortable with the use of Divine Intervention, and that having a piece of Valenwood magically appear in Highrock would feel contrived, and weird for the sake of being weird. The disadvantage is that we would have to figure out how KDWD got to where he was without people learning of his presence.

KDWD's Timeline if He Moved to Malekna Forest:
"So the official timeline, such as I can make of it, is that the Wild Hunt began in Cyrodiil in 1E 369, killed Borgas and the Alessians, devoured itself except for a handful of very powerful monsters which made their way back to Valenwood for a time (with KDWD making its lair in the Lympan March) At approximately the year E3 230, KDWD was enslaved by Camaron Usurper in his bid for conquering Tamriel. With the Empire distracted, Camaron was able to conquor along the west coast up to the Illiac bay with the help of KDWD. The Baron Othrok of Dwynnen lead his army against Camaron and released KDWD with druid magics, placing the thought in his mind to settle in the small patch of forest at the base of the Wrothgarian mountains known as Malekna Forest."
Top

And it’s close to the Wrothgarians. Perhaps even a change to something like Malechna Forest would fix the issue above of “not Gaelic-sounding enough.”
Top

Changing the name slightly might indeed be more beneficial. For now the name seems to have stuck for over a year, so comparatively there is not a big incentive to change it. The majority of the theme of the region is centered around King Dead Wolf Deer, and the Crypt of Hearts, I think that should remain the focus. Though some witches or maybe some cultists wouldn't go amiss.
>This is when ThomasRuz made a new discord channel about maps and the conversation died.
Top
Post Reply
8 posts • Page 1 of 1