This will be primarily an unmarked quest - this claim is for implementing the dialogue and scripting. 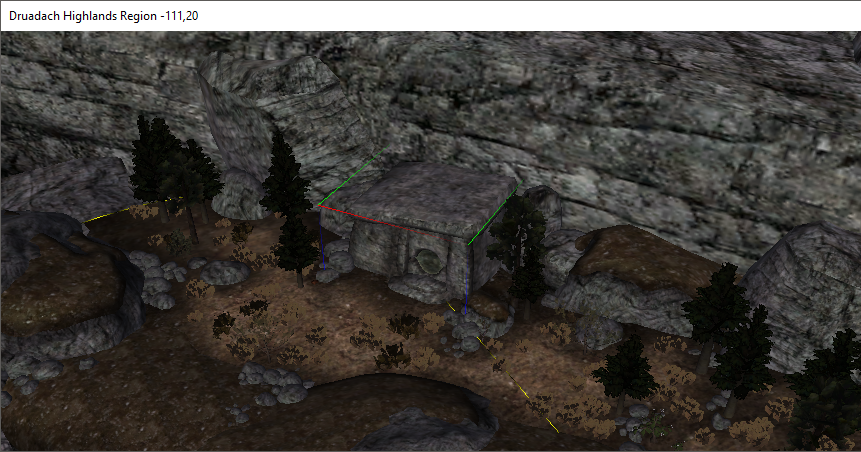 The situation: Ekil the Severed (formerly Ekil Knot-Tongue) was a Clever-Man in the service of King Gurm the Steadfast (r. 2E480-489), known for his wit and love of riddles. He wagered his neck in the king’s riddle contest, boasting that his head was all he ever needed, but lost when a mysterious stranger was able to solve his impossible conundrum. King Gurm was obliged to honour Ekil’s wager and take his neck, but kept the head and installed it to protect the treasure chamber of his barrow. Ekil’s lot is now to challenge grave robbers and other intruders to a contest of wits, guarding his king’s wealth and awaiting the end of the kalpa. However, he has never forgotten the mysterious stranger who solved his impossible riddle and cost him his life, and may appreciate the player solving that particular mystery as well.

Based on a rumour, note, or their own exploration, the player will encounter Ekil's head in what is currently Barrow_99, located at -111, 20. The head will be an activator that initiates dialogue with a creature (not NPC) hidden in the cell that serves as Ekil's disembodied voice. Ekil will explain his role as guardian of the barrow and challenge the player to a riddle contest, with three consecutive correct answers leading to a wall sliding down and access to King Gurm's treasure. A wrong answer will forfeit the contest, and the player cannot open the wall. However, before Ekil will ask any of the riddles he insists on the player filling his goblet (and has unique dialogue for different alcohol types).

Implementing this riddle contest is the priority. Once it is, there is a plan to introduce a full quest where Ekil charges the player with uncovering the identity of the mysterious stranger who solved his impossible riddle. More to come on this.

Dialogue to implement is in the first comment below. Locked until dialogue is written and interior is merged with section file.
Top

Re: Druadach Highlands Quest: Head in the Game [Locked]

Dialogue and other text

Who dares intrude upon the tomb of King Gurm the Steadfast, who is blessed in the eyes of Kyne and Mara alike? In your quest for plunder, unworthy thief, you will find only the punishment our wise ruler has left behind for such as you.
- continue -
Which is to say, can I interest you in a riddle contest? You're under no obligation, of course, but it would break up the tedium and I'd be ever so appreciative. We'd both get something out of it, I suspect.

Still there, thief? How about that riddle contest?

The king I loyally served until he cut my head off and mounted it down where you find me now. But it's not his fault -- I did rather force his hand. A matter of honour, you see.

There was once a time when I was the foremost riddle-smith amongst the royal courts of Skyrim. But then I went and wagered my neck on what I thought was an impossible riddle, only to lose the contest and my head.
- continue -
So now I wait down here, at my king's pleasure, and guard his mighty hoard. Shall we riddle? I'll give you three and if you answer all correctly you'll have earned the respect and admiration of one of Skyrim's greatest minds.
- continue -
And if you fail any of them, well… you fail. No more chances. Usually I would unleash some of Gurm's most eternally-loyal on you, but one sees a lot of grave-robbers in a millennium and I've honestly run out. So instead you just fail.
- continue -
What do you say? Shall we commence?

How about now? Ready to try your wits against an empty, dried-out skull? Ha!

The player's responses to either "riddle contest" are: Ekil will respond to "Sure." with:

Wonderful, simply wonderful. But listen. I've never entered a contest of wits sober and I have no intention of starting now. Would you fill my goblet there? I'm not fussy, and I'm sure Gurm still has alcohol lying around here.

The topic "riddle contest" changes to:

Ekil will respond to "Not right now, no." with:

No? Well, that's fine. I'll be here if you change your mind.

Riddle contest: (if the player has lost)

Rather fun, aren't they? But that's all you get.

Riddle contest: (if the player has won)

Rather fun, aren't they? Meet me here next century and we'll do it again.

It remains inconceivable that my greatest work could have been deciphered so quickly, and yet I am forced to accept that it happened. Oh, did you want to hear it? Too bad, I'm afraid -- I didn't literally throw my life away on a masterpiece just to offer it up to any %PCRace looter who wanders through.

Player responses - rather than list all possible responses, the player will be met with three choices of category (creature, object or abstract). Selecting each will bring up its possible answers. The player should have the option to go back and pick another category.

“Let’s see… a creature of some sort…” “It’s definitely an object. But what?” “It has to be something abstract. Like…”

Absolutely not! Gods, my first riddle contest in centuries and you manage to lose immediately? Get out!

Although the player can still talk to him, they cannot initiate the riddle contest again.

Arms outstretched I do embrace
The sun throughout the day

Dancing to a whistling tune
I chew on uncooked food

The correct answer is and will let the player proceed to the final riddle with the following dialogue:

Yes, very good! Even if that was the easy one of the contest.

An incorrect answer and Ekil replies:

Not even remotely correct. Still, at least you lasted one round against Skyrim's greatest wit -- that pride you feel is reward enough, I should think.

As before, the player can still talk to Ekil but not retry the contest.

* This option will only fire if the player has met Uncle Sweetshare/finished "The Moon Sugar Mystery" (BM_MoonSugar). Ekil will respond:

Your uncle who? By Jhunal's mites, what kind of answer is that?

The player can reply one of two ways: Ekil replies:

Of course. Do you realise that you're madder than I am, and I'm a head that's been mounted in a tomb for a thousand years? Also, no, that's obviously the wrong answer and you lose.

I am the greatest of my tribe
My wives and children always follow
Never will my rivals father issue
And cities fall before me.

“Okay, surely this time it’s a creature.” “Well, it was an object the first two times…” “Abstract.”

The correct answer is and Ekil will gleefully respond:

Yes! Yes yes! You did it -- you lasted three rounds in a riddle contest against the greatest wit that Skyrim has ever witnessed! By Orkey's slough, I haven't felt this invigorated since they cut my head off! You know what? Why don't you take a look at Gurm's little hidden treasury back there? I know I'm supposed to be guarding it for him, but on the other hand he did cut my head off. If we meet again in Sovngarde I'll just tell him that Alduin burned it all before any could be saved.

At this point, the wall will slide open and reveal Gurn's treasury.
An incorrect answer and Ekil replies:

Oh, no! And to think, you were so close. But I suppose that losing is what you have to expect when facing Skyrim's greatest wit in a riddling contest. In fact, I think that's worthy of a song in itself. Run along, now.

As above, the player can talk to Ekil but not retry the contest.

Ekil's impossible riddle
If the player successfully completes the riddle contest, Ekil will greet them with some new dialogue:

Say, friend, it turns out that you're quite the wit. Maybe you'd like to try your mind at the impossible riddle I mentioned earlier?

This changes the topic "impossible riddle" to the following response:

Yes, the one that cost me my head. The king had called all the cleverest in Skyrim to his riddle contest, so that he could demonstrate the supremacy of my wit to all the courts in the land. I spent a year poring over the rune-truths of Jhunal and devising ever more ingenious ways to cast the bones, until I had created a riddle I knew no other could possibly untangle -- for the answer was a truth that none living could yet have seen.
- continue -
I was so confident in my cunning that I wagered my own neck on it. Only, that tall stranger, who kept himself hidden behind a mask and hood, needed think on it only two nights before returning the answer that cost me my head. How could he have possibly known what I had seen? What malign force could have been working against me?
- continue -
Ahem, sorry. Would you like to try your hand at the riddle?

The player has two responses: If "Yes", Ekil states the riddle.
If "No", Ekil replies:

Well, too bad. I've waited an elf's lifetime to try this riddle and you're going to hear it.

and then states the riddle.

What is my deepest nature, tell me true
For if you lie I will cover the world
Men will kneel beneath my thunder
And flee towards the midday sun

“I thought you said this was impossible? It’s clearly…”

The correct answer is "Talos." and will cause an excited Ekil to exclaim:

Yes, Talos himself! Incredible! I mean, not especially incredible since you're alive after he became the Stormcrown and Dragon of the North and all that, but it's still tremendously exciting to hear my greatest riddle solved by an honest mind. Now, perhaps, you can understand why it should have been so impossible for the wits and thinkers of my own time -- none but I had delved so far into Jhunal's mysteries and seen the future with such poetic clarity.
- continue -
And yet, that bastard worked it out in barely any time at all. I have sat here for centuries and yet I still cannot understand who they were or what sinister knowledge they possessed. You know what? I have a task for you. I want you to unmask the identity of this mysterious stranger.

Ha! I knew it was a most devious riddle, even for one who held the key of hindsight. No, friend, the answer was Talos. But now, perhaps, you can understand why it should have been so impossible for the wits and thinkers of my own time -- none but I had delved so far into Jhunal's mysteries and seen the future with such poetic clarity.
- continue -
And yet, that bastard worked it out in barely any time at all. I have sat here for centuries and yet I still cannot understand who they were or what sinister knowledge they possessed. You know what? I have a task for you. I want you to unmask the identity of this mysterious stranger.

This creates the "mysterious stranger" topic, with the following dialogue:

Will you help me? You know the old expression: when a skull mounted to the wall of a king's tomb asks you to solve a thousand-year-old mystery, you say…

With the player's responses being:
Top

This claim has not been updated for more than three months. Please provide an update within a month or this will get revoked.
Top

This is done, and is in the process of being integrated with its relevant interior.
Top

Moving this to completed then.
Top

Okay, this has been altered to match changes to the DH99 int. Found and fixed a bug while I was there. I don't want to merge it until we figure out the OpenMW issue, though.