A claim for the area marked 23 on this map. 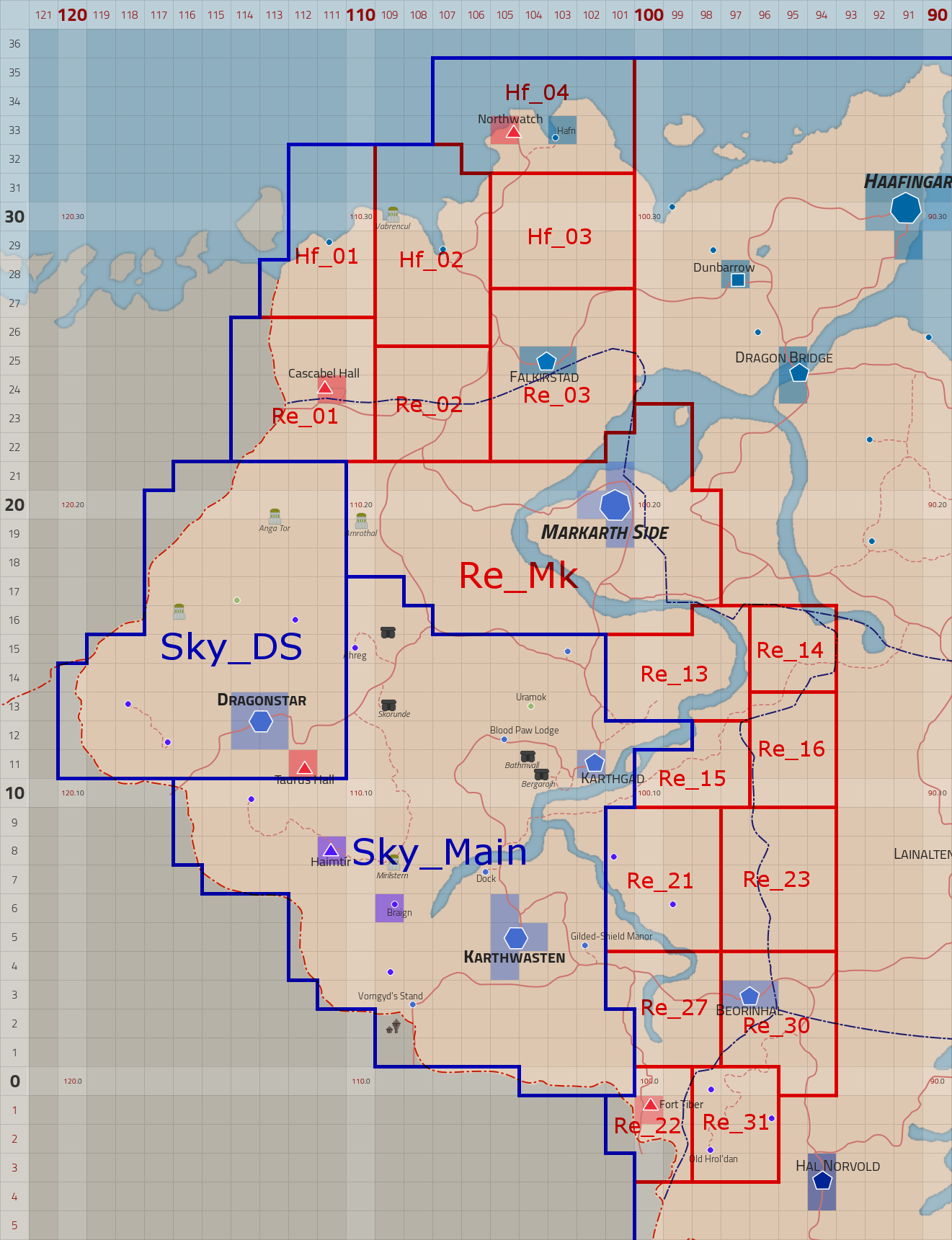 Note: The SH region style has been expanded a bit since this thread, see my Beorinhal claim for some examples. This includes expanding the land texture set from using literally one texture.

The ridge on the eastern side of this claim should be changed into a plateau, possibly slightly declining going east, but not this type of vertical cliff that it currently is.

To the north lies the Midkarth farmlands and to the East are the Ridgelands of Lainalten, Whiterun hold. The region transition should be made using brown grass and rocky dirt, with the dry grass white rocky dirt texture used with intensified frequently going south-west.

Points of interests: We will need to discuss this further. There's an Orcish nomad camp in neighbouring claim 15, pushed out of the southern SH by the Reachmen. The entire region is generally a badlands region, with badly maintained roads and lawlessness running wild. You could put one or two bandit caves, a small primitive barrow and perhaps an exterior bandit camp. There's no roads going through here except the one running along the northern edge, which should use the northern Midkarth region setup.
Top

Would this be a good place for a Horme camp? We'd probably have to figure out to distinguish them from regular bandits, though.

Other than that, I think this stretch of wilderness can get by on the kind of locations you mentioned, roerich. Maybe have one bandit cave, one natural cave with animals in it, a small barrow, and then the Horme camp (if we go with that idea here).
Top

roerich wrote:
Note: The SH region style has been expanded a bit since this thread, see my Beorinhal claim for some examples. This includes expanding the land texture set from using literally one texture.

I've looked through the claims forum, but I can't find this. You'll have to point it out.

The ridge on the eastern side of this claim should be changed into a plateau, possibly slightly declining going east, but not this type of vertical cliff that it currently is.

Looks like it has already been done. Instead of a river it slopes into grass land texture.
Top

Looks like it has already been done. Instead of a river it slopes into grass land texture.

Indeed. The overview map of the reach we keep using shows an utterly outdated state of everything.

We have not really managed to perform a proper planning (meh) for the Sundered Hills yet. The thread for it would be here:
viewtopic.php?f=87&t=661" onclick="window.open(this.href);return false;

There is also the location map workshop as the most up-to-date source of landmass-info we can offer on this forum. At least it should help with the roads.
viewtopic.php?f=145&t=499" onclick="window.open(this.href);return false;
Top

Oh, perfect. Having an updated ingame map to plan from would be great. I've lost the overview of all the new changes to the Rest Exteriors file.

Sorry, it is this one:

Though that claim needs to be cut from the rest exteriors, and I'll need to mark up the borders of the claim and merge it with Spineinside's showcase. Work work work.

And a Hörme camp sounds good. For starter's we'd just need a tatterered banner or something else to show that these aren't just regular bandits.
Top

This really should be revoked by any standards I might have held dear at some point.

Revoked. No updates and user was last active in May 2017.
Top

Gonna claim this, pretty close to finishing GC_04, then I'll start this
Top

Early version, merged my cells that thal borrowed, as well as the northern cells of RE30.

Began diversifying the ground textures below the cliff, Matched cells with claim 30, and did some work on the mountain.

Not too much has been done since the last update except the sundered towers.

File may be dirty, and has some neighboring cells that will conflict with restext
New sundered towers, and a bit more detailing in the area around them.
Going to drop this so Vern can use it as an exterior showcase if roerich says its acceptable.

Claiming for the showcase
Top

Alright proof of life update: Bugger all progress, still trying to get the object density right in cell -96, 9 and some sporadic object placement in the rest.

Honestly I am just not happy with what I have done and given the progress made in the surrounding claims I am no longer comfortable holding onto this given my own slow rate of work, so dropping this now.

(Anyone who wishes to note the bravado I displayed when taking this, you may feel free to offer proportional recrimination now)

Claim this one
Top

Small update. Mainly addition on slope where nordic barrow is located. I didn't clean esp so it's probably dirty as hell.

I must drop this claim due to lack of free time. If anyone want to take it, go ahead.
Top