Family Crypt
Tbd family crypt: claimant should make just an empty box with no loot and no enemies for now.

Building 67 on this map:

Please use the T_Imp_DngCrypt_I - Set.

I think I finished working on this interior. I made emty interior without any misc items, using empty container. It is not som big neglect crypt. Upper room used to be guest room where mourners may stay for a while. On my opinion this room need some rubish to add, empty bottles, pots etc. At the bottom level of the crypt is smal shrine of st Adri and tombs. DoorGtateGarden separating shrine and big, on my opinion must be locked (may be on the quest player get the keys from crypte owner). Tomb also need several expensive weapons and armor near the skeletons.

There seems to have been some miscommunication here. In our conversation on discord I think I was unclear, the tomb was only marked as empty with no loot due to there being no clear plan for it yet at the time. Since that changed, it is okay to have loot and or items in the deeper part of the crypt. The general idea for this claim ended up being the crypt of the Hadrach family, which used to be a prominent noble family, but is survived only by Akatarina Harach, who has been selling off things to stay afloat. Because of this, she needs the player to go into the tomb, which has fallen into disuse and has some sort of enemy, be it undead or something else, and retrieve some heirloom for her to sell off. If you could, populating the tomb with items like any other claim, trying if you can to keep expensive items deeper into the tomb, to show she has been selling stuff off over time. Sorry for any confusion that happened, and totally understand if you don't want to revise it after already putting in work.
Top

Other:
Replaced 2 vanilla empty barrels with their CyrCom_Var variants and 1 near entrance with a lamp barrel
Removed bedrolls, as Infragris said, no one should be living in here
Removed Graveyard fences
Removed Garden Fences
Removed legion planters
Removed Wall fountains
De-ruined it a bit(this isn't meant to be abandoned, it's a family crypt that's had some stuff sold out of it lately which angered some ghosts. No one's been in here throwing family member's bones all over the place and blowing up crates, but flipped over benches and other angry family poltergeist results are fine)
Rationalized and varied object placement a bit, things tend to look better in clumps with space between and in varied positions/rotations, not just in a line or symmetrically placed
Removed logs strewn about, who carried these down here just to throw them about? What purpose would they have served beforehand?
Scaled down a giant urn, whose ashes are interred there that are 1.7 times the size of others?
Varied the sizes and rotations of urns a bit more(besides the 1.7 giant urn, almost all were .8 scale)( within .8-1.2, but no 4 .8s next to each other)
Scaled and moved some T_Glb_Var_SpiderWeb_01a 's that had edges exposed. These are meant to have the flat edges obscured so as to not be clear flat rectangular planes
Replaced some weapons with Legion versions, can't stress the importance of legion service to Colovians, especially noble sons enough. I didn't do this with the armor, but maybe consider it
Replaced bare skeletons with coffins, why would a noble family throw some family members on shelves randomly and others in coffins?
Scaled up a .5 scale urn, MW doesn't have live children, I don't see the value in cremating them
Removed a silver ingot stuck sideways in a coffin slot, looked weird and model is problematic

Conclusion:
This interior was fairly well technically made. It fits the exterior, the north marker is correct, the set pieces are snapped and used correctly, it is Illegal to Sleep, and the lighting was decent. However, there were a lot of issues with the content in it. I have a few suggestions for future interiors to prevent this:

1. Firstly, check other completed(preferably reviewed, and the newer the better but Stirk is also good for some references) interiors of that type for reference on what is typically used in them. This will solve a lot of the grave fences and garden fences type issues. Additionally, if there is a Cyrodiil variant of something, in most cases it's better to use it instead of the vanilla one. This is especially true for generic containers, like the empty barrels.
2. Items shouldn't be placed with no explanation for why they are there. Things like the logs in this claim, or the bones all over the place are examples of this. There are no wood-burning areas in the crypt, so they weren't a natural part of it, why would someone bring logs down here and throw them randomly about the crypt? Similarly, why would a rich noble family, or the ghosts of the bodies in the crypt destroy and scatter the bodies in it?
3. This is a collaborative project, and some things are not up to the individual interior developer to decide or implement. Firstly, if you want to stylemix slightly or use something not usually found in a certain type of interior, or if you are unsure of the usage of particular assets, you should ask first. This will also help to avoid situations like the fences, planters, and fountains in this interior. Secondly, If a location is slated for a quest, or tentatively might have one, this is not a reason to add quest items in the interior, or make demands about what the quester should do with the interior later. If you have an idea, feel free to suggest it in the discord or even here in the thread, but keep in mind that it is only a suggestion, and ultimately the leads and the questers have the final say in an actual implementation in these instances.
4. Groups of items generally look better if you have them separated in clumps here and there with some space in between and variation in variant, scale, and rotation, not perfectly symmetrical or evenly spaced. To illustrate this I have included a few before and after images of my edits:
Before: 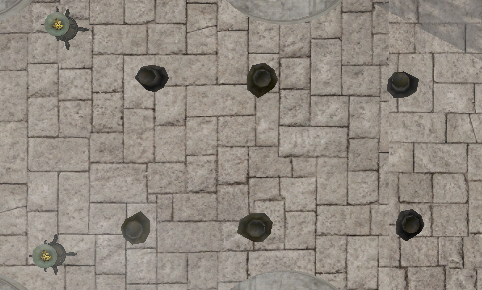 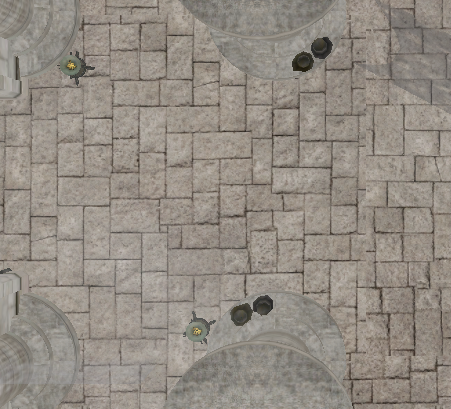 In any case, none of this is meant to discourage you. The feedback here is meant to be as constructive as possible, to help you get up to speed on interior development while maintaining a certain level of quality and consistency with the other interiors in the Anvil Section. I hope you can learn from this review and keep modding.