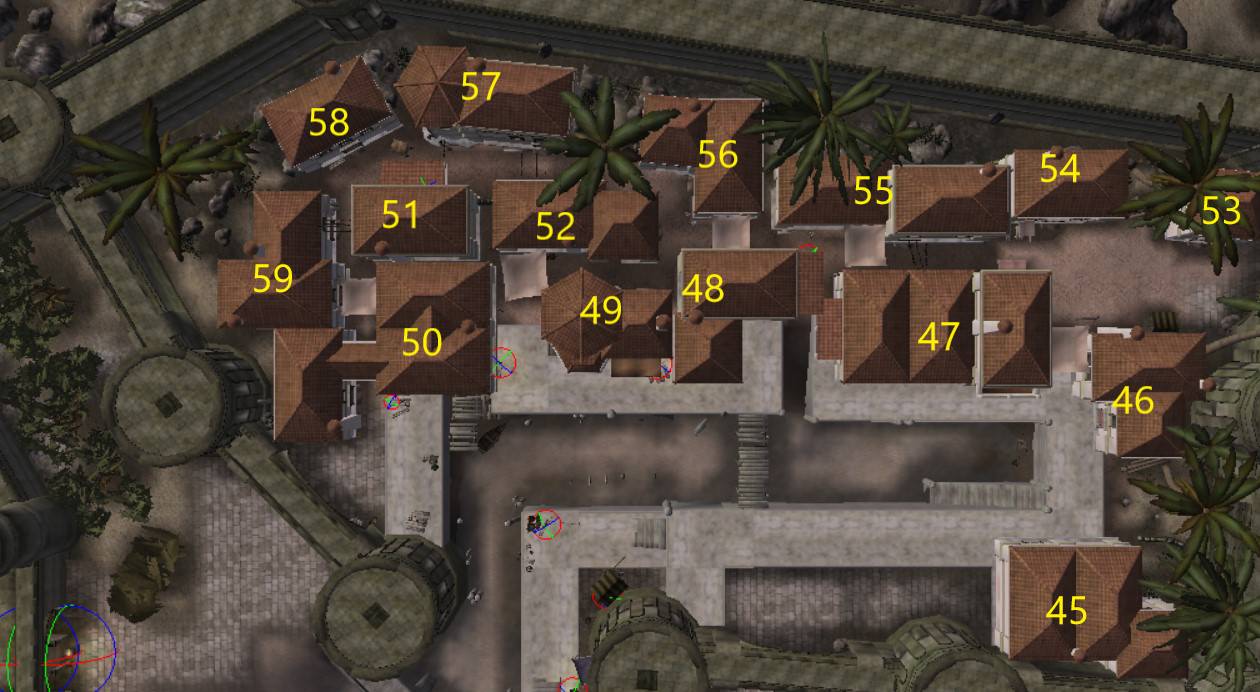 Please use the T_Imp_SetGC_I - Set

57. Seaside Flophouse North
a. Perella(Bosmer, f, agent):At first glance, a common pauper. Perella is in fact a secret Blades agent, posted to keep an eye on the criminal element in the port(specifically, the redguard smugglers). Paranoid about another Blades agent somewhere in town(Nontus Jorrel, in the Praetorium), Perella has hired a private investigator to seek them out(Habashi, in the Sailor's Fluke Tavern).
b. Rok'dun(Redguard, m, sailor):Tenant.
c. Khafiz(Redguard, m, sailor):Tenant.
d. Galtus Melussa(Colovian, m, sailor):Tenant.
e. Lassinia Maro(Imperial, f, pauper):Tenant.
f.There are more inhabitants, but they are out working around Anvil. Be sure to include living space for 7-10 total inhabitants.

May I claim this interior?

It's a vaguely* 2x5, three story high interior using the aforementioned tileset, with a smattering of 1x1 rooms for the various tenants scattered about (I can reasonably add about seven rooms of this size in the interior, with maybe another two being possible depending on how the tower section comes out). Objects will primarily be com_p.

*vague on account of the tower section, which is going to be bit larger then just a 2x2 block..
"SLOAD. SOAP. IS. NOT. SOAP"- TF

This building should be 3x5 on the main part, and then a 3*3 square on the circle but with angled walls to make it into an octagonal room. I suggest matching the center interior floor piece with the corresponding piece of the main room where the door between the two will be and then letting the outside be cut off weirdly, it will save you lots of trouble with the door frame later. Are you on the discord?
Top


Kaiel wrote: ↑
Wed Jun 20, 2018 12:54 pm
This building should be 3x5 on the main part, and then a 3*3 square on the circle but with angled walls to make it into an octagonal room. I suggest matching the center interior floor piece with the corresponding piece of the main room where the door between the two will be and then letting the outside be cut off weirdly, it will save you lots of trouble with the door frame later. Are you on the discord?

Firstly; sorry for taking a bit to get back to you; I only just checked the thread.

I think I might have accidently caused some confusion; when I said that the tower section would be a 'bit larger than just a 2x2 block', I just wanted to give a rough idea of what the size would likely be, minus the walled off sections that wouldn't be part of the interior proper - I was always going to use a 3x3 block, and then employ walls angled such as to make the section resemble the shape of the tower. I probably should have just said that it was 3x3 in size outright and mentioned how parts would be cut off due to the angled walls, as it's a bit clearer with respect to my intent.

So to restate things; the main section is 2x5, and the tower section is comprised of a 3x3 block, minus the space cut off by the angled walls.

As for the size of the main section; I'm going to keep the width the same, but that can change if I see there's a need for it.

Thanks for your suggestion regarding the doorframe, but I've already handled joining the two sections up.

Yeah, I'm on discord, though I don't think I have a 'PT modder' tag, so that's why you probably missed me (I'll shoot you a message so you can find me.

Basic shell and layout of the interior is complete, the cell's name is 'PC_i2-Anv57'; I'll get started on detailing for the next update.

I know I said I was going to put seven rooms in the main section, but I had to revise the layout due to being unable to put one of the windows in the earlier layout (I intially did a basic layout of the whole interior just so I could get a clear idea of how I was tackling it prior to claiming), so now there's only six; to make up for this, I've decided to place two rooms in both the 3rd and 2nd floor of the tower section, though I'll have to wait until I start detailing it to see if it's wholly workable (it's a bit of a squeeze).

Sorry for going over the deadline by a few days; the past month has been very busy for me.

-Detailing is done in the six rooms of the main section (I envisaged the room in the corner of the third level, next to the stairs, as being the blades agent's room; I might have gone a bit overboard with the detailing there, given they are supposed to be posing as a pauper, so I might revise a few things.)

Sorry about being late to update; I meant to do this sooner, but my free time kept getting eaten up by work.

-Not going to lie - trying to solve the issue of the layout of the tower section is a major reason for this claim not being done yet; the atypical nature of the proportions of the room and making it work with their intended purpose - bedrooms - proved troublesome to handle in a manner that didn't cause technical issues (doors clipping each other when opened, lack of space in the rooms proper), but I think I've figured it out a way to make it work. The solution I used was to employ wall screens to act as 'walls' within the room proper (so, to actually act as the ‘walls’ between a specific bedroom and the rest of the space in the tower section) which handles a few key issues rather well:

.Ensuring the sizes of the bedrooms were roughly akin to the other bedrooms of the interior
.Ensuring there was enough space in the bedrooms of the tower section for the NPC/PC to actually navigate (which wasn't possible with normal walls, hence my earlier revision, among other things)
.Avoiding technical issues related to clipping etc.
.Ensuring that the layout in general wasn't bizarre and wouldn't look aesthetically offensive

Of course, if it isn't acceptable (I personally think we can get away with such an arrangement, given the interior's status as a flophouse) then I'll do something else - but I really think this is likely the best solution to this that we're going to get, short of reducing the number of rooms and simply employing normal walls (which would still look kind of awkward, hence my reluctance to do something like that, on top of wanting as many bedrooms as can be managed within the space.)

-Detailing in the top two levels of the tower section mostly done - still have a bit more to do there, not to mention doing the bottom floor (I haven't fully settled on whether to make another set of bedrooms, or try to create a mix of a living/storage space).

-Replaced T_Imp_SetGC_I_Wall with the relevant T_Imp_SetAnv_I_Window object, not to mention replacing incorrect com cutlery objects with T_Imp_ColClay; thanks to Torlof for pointing these out to me - I'm still getting acquainted with all the new objects.

There really isn't much left, so I imagine the next update to be the final one.

-Cluttered the bottom floor of the tower section; I opted to have it serve as a storage space, mainly so that the interior didn't look too monotomous and because there are enough bedrooms in the flophouse.

-Added some minor objects and clutter to the other sections of the interior to flesh it out a bit, added locks to some of the containers.

-Added lighting settings (I'm not too good with these - I just used settings from another Anvil interior).

-Applied some blacksquares to cover the outlying parts of the tower section cut off by the walls.

Hopefully I haven't missed anything obvious.

Off to review!
Top